The completed ports are:

Nightly Rust may be required for some games.

The games have been carefully ported; some design details have been implemented non-idiomatically; this has been intentional, in order not to diverge too much from the original projects (and therefore, to make direct comparison not too hard). Nonetheless, if you have doubts/suggestions about the quality of the code, you're invited to open an issue 😄

Only the stable part of the library is used (the experimental scene API is not used).

The ECS part of this game, originally Legion, has been ported to Bevy (the graphic/input library used is still bracket-lib).

I wrote a mini book, "Learn Bevy's ECS by ripping off someone else's project", based on this project.

This port required a non-trivial restructuring, in order to move to a scene-graph based design. 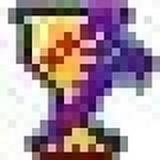 Have you noticed a weird lagging issue when moving around in the bevy port? It seems to be linked to the camera movement where the monsters are basically being rendered twice. Here is a gif of it happening Lagging

yarge - yet another rust gameboy emulator